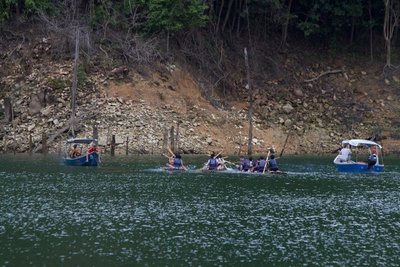 We start this story with a competition. Beginning with Group A, they consisted of nine people. Mr. Gunputh, Maayan, Paul- Emile, Alice, Lea, Amy, Baxter and Lexa. There were 4 groups in total, I was in Group A. The rafts were made of around six or seven huge bamboo logs they were around ten meters long, the rows were dainty, small (which made it hard to row) and if you didn't have gloves, rest assured you would get cuts. And guess who didn't wear gloves? ME.

The rules were to paddle from the houseboat, to the island, get a rock and come back. Then the next group would do the same, the two groups back with two rocks, won! Oh it was a relay race by the way. All the other teams were positive that the boys were going to win, they are the strongest, I mean in your mind who is going to win, a couple of girls or nine boys per group. Once the whistle blew, all the groups were paddling with all their strength. After cheering and shouting “Come on, you can do it guys!” or “You’re so close, just a little further” the first half of our group fell to it's doom and lost the first round. The race wasn’t over, the groups were split into two and our group was just about to start rowing. Once the first half of our group came off the boat, we sprinted onto the raft and left as soon as we could.

We were already miles ahead of the others, we were shocked at how we were beating the boys. We were getting closer to the island although we all realised that we were paddling the wrong way. We found that the paddle had to be rowed to the left for the raft to go to the right. So confusing, I know. We made it to the island first, Lexa the closest to the front of the raft, grabbed a large, ridged rock and we made it back to the houseboat watching the other teams struggling and falling into the water. We may or may not have giggled a little, but come on who wouldn't laugh at people falling off, anything really, especially into water! The other groups were in the middle of the first journey to the island. We were so astonished that we had won. Most of the other groups were five or six per raft, we were four.

All strength, if used to quickly, can be overused. Think of it as the tortoise and the hare. The boys are the hare and we are the tortoise. We were steady and consistent. They were paddling with all their strength but stopping because their energy couldn't keep up with them, good try though. If you overuse your power, be certain that you won't have it for long.

I don't know about you guys but that isn't my only moral, If you believe you will lose, chances are you will. If you believe that you can achieve. The chances of you winning are much higher I'll tell you that. Never give up or never say never, you choose? 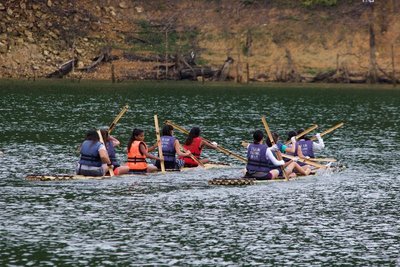